Join Annabel for The Avalon Rose Chapel’s Black Goddess Rites as she guides you through THE most powerful gateway in the Rose Lineage Calendar 2020, with all proceeds being donated to Project Harar supporting vulnerable families in Ethiopia.

Although the live event of The Black Goddess Rites has now completed, access to the recording is available by donation until 25 August 2020

On behalf of The Avalon Rose Chapel, I’m thrilled to invite you to The Black Goddess Rites. Join me on Saturday 15 August to step through THE most powerful Gateway in the Rose Lineage 2020 Calendar.

The multiple alignment is OFF THE SCALE. The 15th August is traditionally…

? The original Festival of the Black Goddess in the Rose Lineage tradition (Diana-Demeter-Cybele), which the events of my historical, witch-burning novel The Serpent’s Tale are based upon

? The later Feast Day of the Assumption of the Blessed Mother, which incorporates liturgy from a Mass to Holy Wisdom (Sophia), thereby creating an unbroken link between Diana-Demeter-Cybele and the Black Madonna-Sophia-Mary-Magdalene

? The date when the Heliacal Rise of Sirius, the first appearance of the Dog Star (our Spiritual Sun and the ‘Pleroma-Heaven’ of the Rose Lineage) in the dawn sky is typically celebrated (although the exact date will depend on your latitude)

AND THIS YEAR, the 15th August is ALSO aligned with….

? THE FIRST GATE OF DESCENT ? in this 8 Year Venus Cycle, which we follow in my Rose Moon Membership

Last year on the 14th August, Venus reached Superior Solar Conjunction and was reborn as the Evening Star on the Festival of the Black Madonna whilst I was on pilgrimage with my daughter Sophia Mary and Alessandra Belloni at one of Her most sacred sites – the ancient Sicilian Sanctuary of the Black Madonna of Tindari, whose statue was found in a cave beside the ancient Temple of Demeter.

This year, I‘m holding ?The Black Goddess Rites? on 15 August to guide us through the First Gate of Descent, before leaving 2 days later on pilgrimage back to the Sanctuary of Tindari.

This is a by-donation event I’m facilitating on behalf of The Avalon Rose Chapel with ALL funds being donated to the charity Project Harar, whose Emergency Covid Response is distributing clean water and soap to vulnerable families in Ethiopia – the birthplace of the African Black Goddess who was the precursor to Inanna, Isis, Demeter, Diana, Cybele and eventually the Black Madonna.

This charity is particularly special to me as its primary focus outside of the pandemic is to surgically treat Ethiopian children born with complex facial conditions like my son, many of whom have been ostracised by their communities.

Allow me to guide you, blessed by the energies of Sirius and Venus, on a powerful journey of Release and Intention with the Black Goddess as we step through the First Gate of Descent with Venus-Inanna-Ishtar.

We will be meeting live online via Zoom on Saturday 15 August 2020 at 19:00 BST and the recording will be available afterwards until 25 August for those of you who are unable to attend live.

I warmly invite you to join me, by donation only with all proceeds going to Project Harar.

With the blessings of the Black Goddess 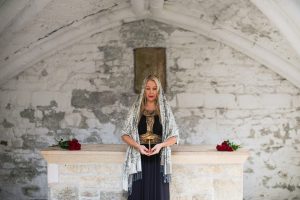 The original Rose Lineage Venus Cycle Membership since 01.01.2019. Join me and our international circle online each lunar month within our sacred Rose Moon Grove. Live from The Avalon Rose Chapel, I will guide you in how to use the ancient Venus-Moon Cycle of the Rose Lineage for your healing and empowerment.